The Ashton Method for Benzodiazepine Taper

The Ashton Method is a safe and effective protocol for gradually stopping benzodiazepines.

Ashton Method is a safe and effective way of treating benzodiazepine withdrawal. Dr. Heather Ashton, Professor of Clinical Psychopharmacology in England, developed her namesake method involving dosage tapering. In 1999, Dr. Ashton wrote “Benzodiazepines: How They Work And How To Withdraw,” which is now known as the Ashton Manual.

Benzodiazepines are a group of drugs called nervous system depressants. They can be used to treat a range of conditions but are most commonly used for treating anxiety, insomnia, and seizures.

Benzodiazepines work by altering the activity of the neurons responsible for triggering anxiety and stress reactions. Neurotransmitters are chemicals that help brain cells communicate with each other. These drugs enhance the effect of a neurotransmitter called GABA (gamma-aminobutyric acid).

Anxiety causes the brain to overstimulate. Physicians prescribe benzodiazepines to counter this overstimulation and reduce the symptoms of anxiety. They act on the central nervous system, producing muscle relaxation and sedation, and lowering anxiety levels.

Overuse or using them for recreational purposes without any medical supervision can be dangerous. Combining benzodiazepines with alcohol can also be lethal.

Reducing or stopping the dose abruptly could cause withdrawal symptoms.

Benzodiazepine withdrawal symptoms can be difficult and may last for weeks. However, these symptoms are managable.

Many factors could influence the severity of withdrawal symptoms, including the dosage taken and the duration for which it was taken. The severity could increase if you have been taking multiple benzos or combined them with other sedating drugs. If you have other substance abuse issues, then also you may experience severe withdrawal symptoms.

Withdrawal onset depends on the type of benzodiazepine you are taking. For instance, Xanax and Ativan are short-acting and leave your system quicker. So, if you have been taking these drugs, you may experience withdrawal symptoms in as little as 12 to 14 hours. However, if you have been taking longer-acting benzos like Klonopin, you may experience withdrawal symptoms only after a couple of days. The reason is that long-acting drugs stay in your system for longer.

How does the Ashton Method work?

The Ashton Method recognizes that if you stop taking benzodiazepines abruptly, especially if you were used to high dosage, it could result in severe withdrawal symptoms. Dosage tapering is recommended for slow withdrawal, reducing the dosage over the course of many months.

According to Dr. Ashton, dosage tapering ensures that there is a slow and steady decline in the concentration of benzodiazepines in your blood and tissues. The outcome is milder withdrawal symptoms as your brain’s natural system can recover and come back to its normal state.Dr. Ashton explains in the Ashton Method that prolonged usage of benzodiazepines takes over bodily functions that are normally mediated by GABA neurotransmitters. When you stop taking benzos suddenly, your body goes into a state of GABA-underactivity. The result is hyperexcitability of the nervous system resulting in withdrawal symptoms.

Removing the drug from your system slowly and steadily allows your body to regain control of the function that was otherwise taken over by benzodiazepine.

However, you should not try to taper the dosage yourself without seeking your physician’s advice. Your physician would create an individual tapering schedule depending on the type of benzo you were taking and for how long. They may also look at other circumstances in your life before putting you on a schedule. For some people, the schedule could last two or three weeks, while some may take several months to get rid of benzodiazepine dependency.

All sedatives initially produce a sense of euphoria, well-being, and disinhibition. They are most often prescribed to reduce anxiety and sleeplessness.

At high doses, benzodiazepines can cause anterograde amnesia, which means the user stops recording memories despite being awake and alert, so that there is no memory of events during the time of the sedative effect. With heavy alcohol use, this is known as a “blackout,” which is not the same thing as “passing out” (oversedation).

Patients who abuse sedatives may not realize they have had a blackout until someone “reminds” them of things they said or did during an amnesic period. This is like having a “Swiss cheese memory” with holes in it, except that the memory gaps aren’t always obvious because “you don’t remember what you don’t remember” while using.

As the dosage increases, these drugs cause increasing sedation and central nervous system depression, and can eventually lead to an overdose syndrome of profound sedation, respiratory depression, and death. 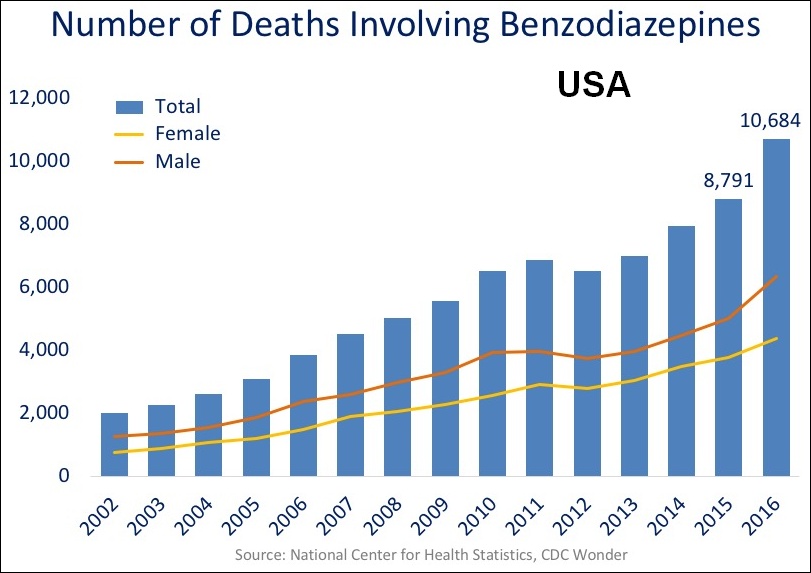 Pharmacologically, sedatives cause these effects presumably by affecting the gamma-aminobutyric acid (GABA) receptor system. GABA is the major inhibitor neurotransmitter in the brain, and it serves as a natural counterbalance to the many excitatory neurotransmitters, such as glutamate. When GABA latches onto its receptors, it causes an ion channel to open up, which in turn allows negative chloride ions to enter the neuron.

This hyperpolarizes the neuron, which is the opposite of the more famous depolarization process that causes neurons to fire. Hyperpolarization inhibits action potentials and keeps neurons quiescent.

There are two classes (GABA A and GABA B), each with multiple subunits. Our current understanding is that benzodiazepines work by altering the shape of the receptor so that GABA can inhibit neurons more efficiently. 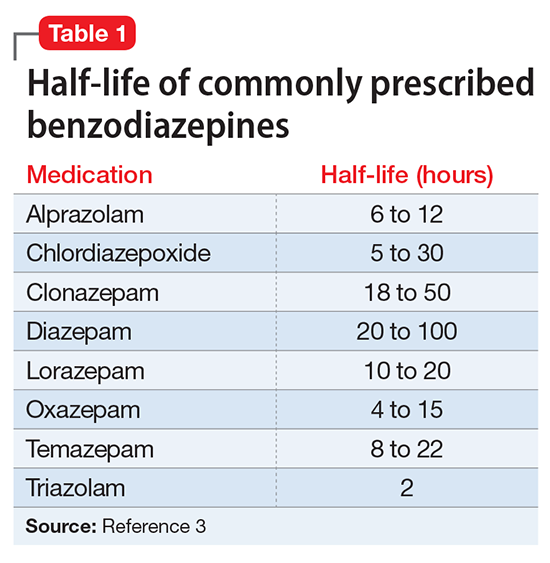 All benzodiazepines are potentially addictive, though some appear to be more “liked” by substance users than others. For example, alprazolam has a very rapid onset of action and is probably the most popular sedative on the black market.

Multiple studies have shown an association between long-term use of benzodiazepines and development of dementia when compared to those who have not used benzodiazepines.

Benzodiazepine use can as much as double the risk for dementia (Billioti de Gage et al, 2015). The mechanism for this is not yet known rather than just a correlation. Nonetheless, the research is concerning, and sharing the information with patients may help motivate them to stop chronic benzodiazepine use.

Assessment of Benzodiazepine Use Disorder

Diagnosing sedative use disorder is straightforward for patients who are using large amounts and who are forthcoming about their use. In terms of formally diagnosing, the DSM-V criteria for Sedative Use Disorder is as follows:

Treatment of Benzodiazepine Use Disorder

In treating sedative addiction, there are two phases to consider: withdrawal/detox and relapse prevention. Before starting treatment for a patient such as H, I use the “good things and less-good things” motivational interviewing technique in order to help him see the advantages of quitting, as illustrated here:

Relapse prevention One might think that naltrexone or Acamprosate would be helpful to prevent sedative relapse, since they are effective for treating addiction to alcohol (aka the liquid sedative). But there is no good evidence—and very little published research—confirming that these meds work for sedative use disorder.

While it’s possible that future research will support the use of these medications, at this point the best course is to use “supportive” treatments, such as antidepressants and nonaddictive anxiolytics or hypnotics. Psychosocial treatment involves some combination of 12-step program attendance, psychotherapy, and substance abuse treatment programs, such as intensive outpatient programs.

Because there is no specific pharmacotherapy, the focus of behavioral treatment is on developing relapse prevention skills and appropriate coping skills. Anxiety is often a significant component of self-medication with sedatives, so individual and group therapy can be valuable for developing techniques to self-soothe and calm down when dealing with stressful events.