A relatively common disorder, binge eating disorder (BED), is common in young adult females. BED is the most prevalent eating disorder and is often associated with obesity. It is identified by a bulimic eating pattern but without a compensatory purging or laxative abuse. Binge Eating episodes have associated negative psychological and social problems.

Binge episodes usually occur at least once a week for three months.

BED is characterized by chronic overconsumption of food resulting in embarrassment, severe distress, and potential health problems. Formally included in the DSM-5 as a disorder for the first time, it acknowledges its debilitating force.

About 2-5% of the adult population is estimated to have BED. Medical and psychiatric comorbidities are common in those with binge eating disorders. They are susceptible to poor inhibitory control and heightened cravings which leads to compulsive overeating and weight gain.

BED impairs quality of life and instills a poor body image in the individuals. Those with BED are quite often undiagnosed or receive inadequate treatment. An extensive evaluation is necessary to diagnose individuals with binge eating disorders.

Primary use of Naltrexone

Primarily, Naltrexone is used to treat alcohol or opioid dependence. It reduces cravings and the feeling of euphoria linked with substance abuse disorder. An opioid antagonist, Naltrexone, works by blocking the effects of opioids, both within the body and outside.

Compared to substance abuse disorder (SAD), BED both face episodes that include craving and indulging in the craving. BED and SAD both show similar neurological pathways. Some people who suffer from BED may also be addicted to food, although the scientific community has not yet agreed on its definition.

The above and the connection between BED and SAD may be the reason why Naltrexone works for patients with binge eating disorder.

Naltrexone has been found effective in those having binge eating disorder. It alters the hypothalamic brain regions that play a role in regulating appetite and energy expenditure. Naltrexone also affects the reward system, which mediates eating behavior. Clinical trials suggest that the drug also induces considerable weight loss.

Patients with binge eating disorder tend to be overweight and find it hard to lose that weight. Putting them on a low dose of Naltrexone might be helpful to regulate weight, hormones and sleep. Low doses of this medicine can also elevate mood by increasing the production of serotonin and dopamine. It, in turn, decreases anxiety and stress, lowering the need for emotional eating.

Patients on Naltrexone have reported a consistent decrease in their food intake. Naltrexone has been known to reduce response to food and decrease the motivation to eat. Administration of Naltrexone influences eating habits and reward system activity. It inhibits an increase in dopamine levels when food is eaten, breaking the food dependency cycle. It also affects food-seeking habits and binge eating behavior.

Naltrexone reduces an individual’s affinity towards food that is considered palatable. Their preference for flavors and diets are also influenced. Inhibiting an increase in the levels of hunger, Naltrexone reduces food intake. It produces a considerable decrease in the pleasantness of food. It is stronger in food containing protein, fats and sucrose. The food intake is reduced, but the sweetness or saltiness of food not affected.

Studies have found that a comprehensive treatment that includes pharmacotherapeutic and psychotherapeutic interventions helps BED. Either of the treatments on their own is not as effective as having them together. Cognitive behavioral therapy (CBT) and medication have proved to be effective in treating binge eating disorder. Also helpful is involving families and attending support groups. Using augmented treatments like the 12-step de-addiction program can help form an effective combination therapy for BED.

Binge eating disorder can benefit greatly from family intervention. The goal would be to involve the family in eating disorder management. Subsequently, the control of eating could be handed over to the parents, which would help the individual and their family return to normalcy.

Naltrexone in the extended-release form, and Bupropion ER, has been effective when used for binge eating disorders. In combination, they work as an anti-obesity drug. Taken together, this combination of medicine reduces food intake.

The pharmacologic activity of naltrexone is long-lived. It has an effective half-life of over three days. Taken with Bupropion ER, Naltrexone works well for individuals with binge eating disorder. However, an overall combined treatment is the best way forward for these individuals.

The effectiveness of Naltrexone has now been tested for both alcohol and opioid addiction as well as binge eating disorder. Clinical studies have shown Naltrexone to be helpful in individuals with BED and comorbid obesity.

Your doctor will determine the right dosage of your medication. Initially, lower doses will be given, and optimum dosage will be reached slowly.

If you think you show signs of a binge eating disorder, consult your doctor. Naltrexone might be the right drug for you.

Time course of the effects of lisdexamfetamine dimesylate in two phase 3, randomized, double-blind, placebo-controlled trials in adults with binge-eating disorder

Abstract
Objective: This study examined the time course of efficacy-related endpoints for lisdexamfetamine dimesylate (LDX) versus placebo in adults with protocol-defined moderate to severe bingeeating disorder (BED).
Methods: In two 12-week, double-blind, placebo-controlled studies, adults meeting DSM-IV-TR
BED criteria were randomized 1:1 to receive placebo or dose-optimized LDX (50 or 70 mg).
Analyses across visits used mixed-effects models for repeated measures (binge eating days/week,
binge eating episodes/week, Yale-Brown Obsessive Compulsive Scale modified for Binge
Eating [Y-BOCS-BE] scores, percentage body weight change) and chi-square tests (Clinical Global
Impressions—Improvement [CGI-I; from the perspective of BED symptoms] scale dichotomized as
improved or not improved). These analyses were not part of the prespecified testing strategy, so
reported p values are nominal (unadjusted and descriptive only).
Results: Least squares mean treatment differences for change from baseline in both studies
favored LDX over placebo (all nominal p values < .001) starting at Week 1 for binge eating
days/week, binge-eating episodes/week, and percentage weight change and at the first posttreatment assessment (Week 4) for Y-BOCS-BE total and domain scores. On the CGI-I, more
participants on LDX than placebo were categorized as improved starting at Week 1 in both
studies (both nominal p values < .001). Across these efficacy-related endpoints, the superiority
of LDX over placebo was maintained at each posttreatment assessment in both studies (all
nominal p values < .001).
Discussion: In adults with BED, LDX treatment appeared to be associated with improvement on
efficacy measures as early as 1 week, which was maintained throughout the 12-week studies.

Abstract
Importance
The ability of pharmacotherapies to prevent relapse and maintain efficacy with long-term treatment in psychiatric conditions is important.

Objective
To assess lisdexamfetamine dimesylate maintenance of efficacy in adults with moderate to severe binge-eating disorder.

Results
Of the 418 participants enrolled in the open-label phase of the study, 411 (358 [87.1%] women; mean [SD] age, 38.3 [10.4] years) were included in the safety analysis set. Of 275 randomized lisdexamfetamine responders (placebo, n = 138; lisdexamfetamine, n = 137), the observed proportions of participants meeting relapse criteria were 3.7% (5 of 136) for lisdexamfetamine and 32.1% (42 of 131) for placebo. Lisdexamfetamine demonstrated superiority over placebo on the log-rank test (χ21, 40.37; P < .001) for time to relapse; the hazard ratio, based on a Cox proportional hazards model for lisdexamfetamine vs placebo, was 0.09 (95% CI, 0.04-0.23). The treatment-emergent adverse events observed were generally consistent with the known profile of lisdexamfetamine.

Results: We found 45 unique studies with low/medium risk of bias, and moderate support for the efficacy of cognitive behavior therapy (CBT) and CBT guided self-help (with moderate quality of evidence), and modest support for interpersonal psychotherapy (IPT), selective serotonin reuptake inhibitors (SSRI), and lisdexamfetamine (with low quality of evidence) in the treatment of adults with BED in terms of cessation of or reduction in the frequency of binge eating. The results on weight loss were disappointing. Only lisdexamfetamine showed a very modest effect on weight loss (low quality of evidence). While there is limited support for the long-term effect of psychological treatments, we have currently no data to ascertain the long-term effect of drug treatments. Some undesired side effects are more common in drug treatment compared to placebo, while the side effects of psychological treatments are unknown. Direct comparisons between pharmaceutical and psychological treatments are lacking as well as data to generalize these results to adolescents.

Conclusion: We found moderate support for the efficacy of CBT and guided self-help for the treatment of BED. However, IPT, SSRI, and lisdexamfetamine received only modest support in terms of cessation of or reduction in the frequency of binge eating. The lack of long-term follow-ups is alarming, especially with regard to medication. Long-term follow-ups, standardized assessments including measures of quality of life, and the study of underrepresented populations should be a priority for future research.

Binge-Eating Disorder in Adults A Systematic Review and Meta-analysis

Purpose
To summarize evidence about the benefits and harms of psychological and pharmacologic therapies for adults with binge-eating disorder.

Data Sources
English-language publications in EMBASE, the Cochrane Library, Academic OneFile, CINAHL, and ClinicalTrials.gov through 18 November 2015, and in MEDLINE through 12 May 2016.

Limitations
Most study participants were overweight or obese white women aged 20 to 40 years. Many treatments were examined only in single studies. Outcomes were measured inconsistently across trials and rarely assessed beyond end of treatment.

“Mental pain is less dramatic than physical pain, but is more common and also more hard to bear. The frequent attempt to conceal mental pain increases its burden: It is easier to say ‘My tooth is aching’ than to say ‘My heart is broken.'” 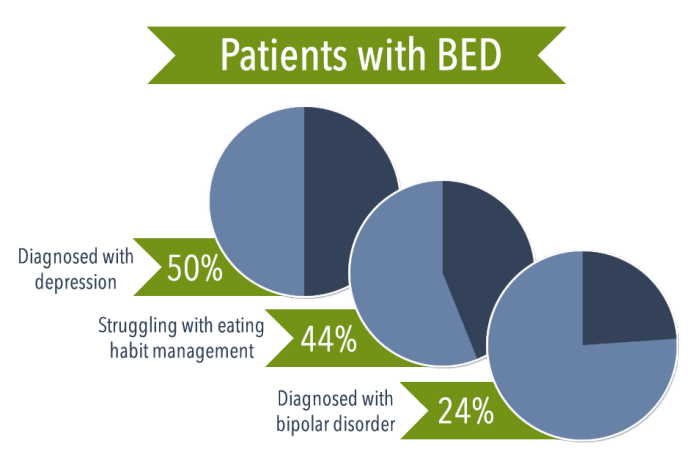 The Opioid System and Food Intake: Use of Opiate Antagonists in Treatment of Binge Eating Disorder and Abnormal Eating Behavior

How Relevant is Food Craving to Obesity and Its Treatment?